A product of FARMLINK, Kampot

KADODÉ, the upmost care in spices

Directly to your dish

The region of Kampot, in the south cost of the kingdom of Cambodia is the home of one the finest gourmet pepper in the world. It is one of the very rare spices to benefit from a Protected Geographical Indication.
Since 2006, FARMLINK is the main partner of the Kampot farmers to promote Kampot pepper to the most exclusive food connoisseur worldwide.

Our idea is to bring out the best of the local farmers talent by providing them with the best refinery techniques using the local resources. Farmlink is located in Kampot Town, a few kilometers away from the plantations, enjoying a precious proximity with our farmer partners.

The label KADODÉ is the result of this fruitful cooperation, bringing Kampot pepper to a state of the art by the upmost care brought by the FARMLINK skilled team.
KADODÉ means “Gift from earth” in Khmer. KADODÉ Kampot pepper is the reference for Kampot Pepper internationally and the most direct link between you and the farmers.

Each peppercorn has been hand selected and each pack of KADODÉ can be traced to the exact farmer that grew your Kampot peppercorns.

Enjoy one of the finest peppercorn in the world...
by Farmlink

A protected Geographical Indication since 2006...

The Kingdom of Cambodia has always been a rural country, where farming has been elevated to a state of the art by centuries of preserved traditions and passed on know-how.
The Khmer people are looking torwards the future while trying to keep up with ancient traditions and cultural heritage despite the trials of the recent past. Many regions from Cambodia still hide culinary wonders such as Kampot Pepper.

KADODÉ's main mission is to identify and preserve them. Major companies are recently investing widely in Cambodia provoking a swift from local family farms to large pepper exploitations and mechanical pepper processing. We at KADODÉbelieve we can connect local farmers with international fine food and dining.
We believe there is a sustainable way to protect those farms by opening international markets to sophisticated local quality products.
Family farms still operate with manual and organic-like techniques, with respect to the natural environment and the quality of their crop. 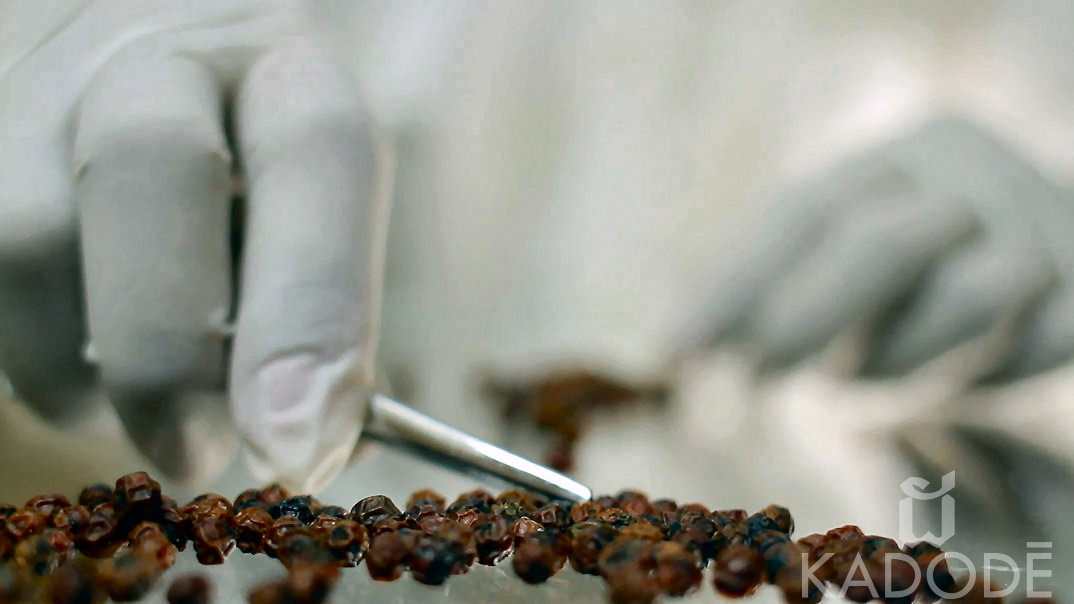 Traditional techniques of farming, harvesting, refining and sorting has made Kampot Pepper one of the finest pepper in the world.
Its rarity, only 40 tons of Kampot pepper are produced each year in the Kampot pepper garden, adds the final touch to make an exceptional pepper. This compairs with 200 000 tons produced in the world each year.
Pepper is the king of spice, being the most widely used spice in the world, but many country are now producing on large scale, bringing down the image and quality of this marvellous spice.

Kampot pepper has certainly helped bring black pepper to its most noble times, to be once again highly regarded by spice specialists and Chefs around the globe.
Since 2006, FARMLINK is the main partner of the pepper farmers of Kampot.
We have established a close relationship with over 120 families of pepper farmers, that have chosen to put their trust in Farmlink to naturally process and promote their Kampot pepper crops.

We take pride in helping the Kampot farmers make the best of their wonderful pepper, adding the final touch to all their efforts and care towards their pepper gardens.

KADODÉ is Kampot Pepper's reference and we are now proud to present some new fantastic products from Cambodia.
Kampot region is also the home of the most important sea saline in Cambodia, providing the entire country's salt consumption.

In 2012, Farmlink has started the first crop of KADODÉ Kampot fleur de sel, using the same exact technique used in the world famous Region of Brittany in France, that produces the Fleur de Sel de Guérande.
KADODÉ is Kampot Pepper's reference and we are now proud to present some new fantastic products from Cambodia.

In 2012, Farmlink has started the first crop of KADODÉ Kampot fleur de sel, using the same exact technique used in the world famous Region of Brittany in France, that produces the Fleur de Sel de Guérande.
Kampot region is also the home of the most important sea saline in Cambodia, providing the entire country's salt consumption.